Thinking in Swift, Part 4: map all the things!

In previous articles of this series, we learned about using map and flatMap on arrays. Today we’ll discover map and flatMap also exists on Optionals. And on plenty of other types.

This post is part of an article series. You can read all the parts here: part 1, part 1 addendum, part 2, part 3, part 4

So, as a reminder, we learned in a previous article that the signature of the map() and flatMap functions on Array<T> are:

Well, not surprisingly, the signature of map() and flatMap on Optional<T> are really similar:

Well that’s quite simple: similarly to the same method on Array<T>, it takes the content of that Optional<T>, transform it using the provided transform: T->U, and wrap the result in a new Optional<U>

When you think about it, this is very similar to what Array<T>.map does: it applies a transform to each inner value inside the Array<T> (resp. Optional<T>) and return a new Array<U> (resp. Optional<U>) wrapping the transformed values.

Back to our example

So, how can all this be useful in the example code we’ve been working on?

Well in the last version of our code, we had an itemDesc["icon"] which was a String?, and we wanted to transform it into an UIImage; but UIImage(named:) takes a String as a parameter, not a String?, so we needed to call that method with the inner String, and only if the optional indeed had such an inner value (= was not nil).

One solution would be to use Optional Binding to do this:

But that’s a lot of lines for such a simple operation.

In the previous example, we used a (quite dirty) alternative solution, using the nil-coalescing operator ??:

That worked but only because if the iconName is nil, we will trick the initialized of UIImage and use UIImage(named: "") which will indeed return a nil image. But that doesn’t feel clean at all, we’re kinda bending the initializer to make it work here.

So why not use map? Indeed, we want to unwrap our Optional<String> if it’s not nil, transform that inner value into an UIImage and return that UIImage, so isn’t it exactly an appropriate use case?

Wait… that above code doesn’t compile. Could you guess why?

The problem with the above code is that UIImage(named: …) returns an optional too: if there is no image with the name provided, it can’t create an UIImage, so that makes total sense for this initializer to be failable and return nil in such cases.

So the problem here is that the closure we gave to map takes a String and returns… an UIImage? — as the initializer is failable and can return nil. And if you check the signature of map again, it expects a closure of type T->U, and return an U?. So in our case, U stands for UIImage? and so the whole map expression will return U? which is… an UIImage??… Yes, that’s a double-optional, oh boy!

flatMap() to the rescue

flatMap is like map, but takes a T->U? transform (instead of a T->U one), and it “flattens” (hence the name) the result to only have one level of optional. This is exactly what we want!

So here’s what flatMap does in practice:

In short, item.icon will only have a non-nil value if itemDesc["icon"] as? String is non-nil AND UIImage(named: imageName) succeeded.

This feels much better and more idiomatic than tricking the initializer with a ??.

Use init as a closure

To go a bit further, the code above could also be written in a more compact way, as Xcode 7 now exposes the constructors of a type through the type’s .init property.

This means that UIImage.init is actually already a function that takes a String and return an UIImage?. So we can use it directly as the parameter to our flatMap call, no need to wrap it in a closure!

Wow! so much magic!

Ok, that being said:

So here is this last lesson applied to our previous code.

A look back at our ObjC code

Take a little time to compare the final above Swift code with the original ObjC code we started with. We’ve adapted quite a lot of stuff from there!

If you look closely at those two ObjC vs. Swift codes, you’ll realize that the Swift code is not significantly smaller (5+15 LoC1 for Objc vs. 19 LoC1 for Swift), but it’s way safer.

Especially, in that Swift code we learned to use guard, try? and as? that forces us to check that everything is of the expected type, where the ObjC code didn’t bother and would have crashed 💣💥. So maybe it’s quite the same size, but the ObjC code is way more dangerous!

With this article series, I hope you realize that you shouldn’t try to translate your ObjC code to Swift directly. Instead, try re-thinking your code, and reimagining it. It’s often better to start from a clean state and rewrite your code with the Swift idioms in mind than to try to translate ObjC code directly.

I’m not saying that it’s easy. Changing your way of thinking when you’re already used to code in ObjC and used to its patterns and ways to write code may take some time. But it’s definitely for the better.

That concludes the last part of the Thinking in Swift series2. It’s time for you to go nuts on new Swift projects, and to fully commit to thinking in Swift! 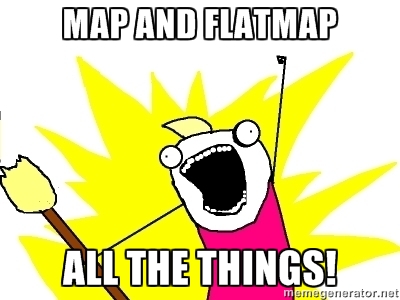