Today for my come-back post (hopefully), I’ll be talking about a tip for your UITableViewDataSource and UITableViewDelegate. The idea is in fact applicable to a lot of other things following the same delegate pattern, but the use case of UITableView will hopefully be the most concrete example for most people.

The general idea is in fact very simple: extract your UITableViewDataSource and UITableViewDelegate into a separate object. And make e.g. your UIViewController retain that object and set it as the tableView’s delegate and dataSource.

In practice, you can move all the responsibility to a single object (making it both the delegate and dataSource, and making it the responsibility to provide the cells), or you can make that separate objects (one for delegate, one for dataSource), or you can make that separate object just be a proxy, that will be reusable for multiple ViewControllers, and delegate more simple queries to each UIViewController using it to customize just the right things.

Let’s start with a very simple example: a list of products.

Splitting your DataSource into a dedicated type would look like that:

And then you’ll use it this way in your UIViewController:

In that very simplistic example, the benefits might not seem very visible at first, especially because for now our DemoViewController doesn’t do much yet. But in a real world example where that DemoViewController probably does a lot more — like some logic specific to your app, or handling any @IBAction you have on the rest of your screen, etc — I hope you can see how at least extracting all the UITableView display logic would help here.

It’s also generally easier to reason about, as all the logic about the display of that DataSource is now extracted in its dedicated file & class, instead of it being mixed with the rest of the code of your UIViewController, and that separation will probably help you when tweaking or editing the way the UITableView should display its data, by focusing on one specific and isolated file, instead of scrolling amongst other unrelated code.

One tricky thing however when you put your dataSource in a dedicated, separate object, is to not forget to retain it.

The dataSource property on UITableView is weak (as all dataSources and delegates should be), so if you just affect tableView.dataSource to a newly created ListDataSource(…) without retaining it, that ListDataSource instance will then be released from memory and your UITableView will go back to being empty.

So when you use that trick, just don’t forget to retain your object serving as DataSource. In the example above, I made the DemoViewController retain it by using a var currentDataSource property, and used that occasion to use a didSet on it to propagate it to the tableView and reload it afterwards.

Now, imagine that without changing your app’s logic itself, you just wanted to adjust the way the list of products were displayed, e.g. group your products in sections according to their category.

All you’d have to do is to modify the implementation of your DataSource class, without changing anything in your DemoViewController!

But let’s take that one step further: instead of modifying the existing DataSource, let’s keep it but also duplicate it to create a new one (SectionDataSource below). By keeping both of them, we’ll then be able to switch between the two at runtime later!

So let’s create our new SectionDataSource, very similar to the first one, but which now handles sections:

See how everything continues to work, while the majority of your changes was located in a dedicated file and your ViewController was barely affected. That also helps to focus your editing in one specific class in a single file, instead of finding in a Massive ViewController which lines to modify. 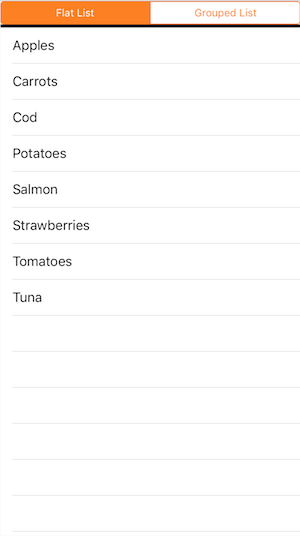 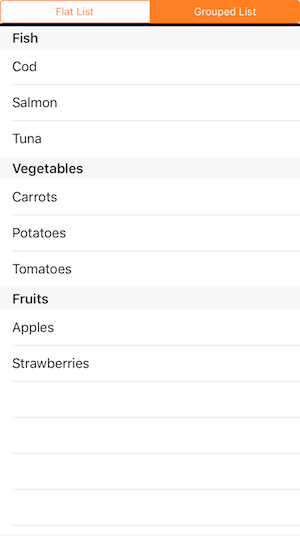 Imagine if you had to do all that logic in your DemoViewController directly instead of having separate objects… That would very likely mean:

A lot could go wrong in this setup, from mismatching the conditions in different methods you have to implement to having to focus on understanding the logic as a whole and understand the big picture at once to see how everything works together, with risks of inconsistencies along the way.

But instead, because we separated the concerns of the UITableViewDataSource in their own classes, it’s all easier to read and reason about!

From there we can go way further and improve this a lot:

For extending the idea to UITableViewDelegate, you could go multiple ways:

Both options are valid, it depends of your needs and what your dedicated implementations are doing. The fact that for UITableView, the delegate and dataSource are often closely related might make you go towards the first solution though 1.

Also, imagining you go with the first route (use the same object for dataSource and delegate), you could give closures to that object on init to tell it what to do especially when a Product is selected, then forward delegate method to call that closure:

Once again, the benefit of that is, if you do the same on the SectionsDataSource, then just switching your currentDataSource from ListDataSource to SectionsDataSource wouldn’t require to change your ViewController, which would still work as expected, even if in one case the list is flat and in the other it’s structured in sections!

That’s because now your DataSource object, whichever one is used, is responsible for translating your IndexPath into Product instances, so that you don’t have to care about how those products are organized in the DataSource, all you have to implement in your ViewController is what to do when a given Product is selected (instead of when a given IndexPath is selected), abstracting away all that IndexPath->Product translation logic out of your ViewController.

There are probably other ways to let your UIViewController tell how to build each cell for cases where you want that flexibility, all being quite similar in concept, but I hope that gives you some interesting ideas.

It’s time for you to play with all those concepts yourself! Especially the ones I didn’t detail much in that last part (Generics, etc) could be interesting to explore on your own. But if you’re curious about my take on one possible solution, I’ve attached a playground for you to browse the code we discussed — and even a solution using Generics so those DataSources are reusable for types other that Products in other places in the same app.

Also, keep in mind that this idea we just applied is indeed well suited for UITableViewData & UITableViewDelegate, but can also be used for other delegate patterns as well 😉